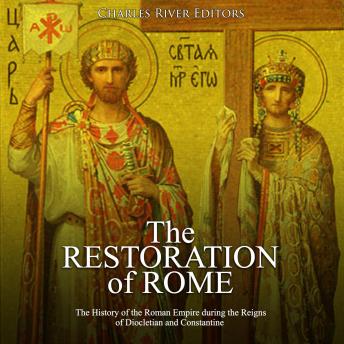 The Restoration of Rome, The: The History of the Roman Empire during the Reigns of Diocletian and Constantine

The 50 years following the assassination of Severus Alexander on March 19, 235 CE has been generally regarded by academics as one of the lowest points in the history of the Roman Empire. This stands in stark contrast to the previous 150 years, which included the reigns of the Five Good Emperors and has been universally praised as one of the high points of the empire. Severus Alexander was the last of the Severan emperors, and the subsequent years of crisis (235-285 CE) were characterized by a series of short reigns, usually ending in the violent death of the reigning emperor.
At the same time, this period of time also saw the empire beset by threatening forces on all sides. The Romans faced a newly resurgent Persia in the east, as well as significant forces from German tribes on the Rhine and Goths along the Danube. The various conflicts would result in the unprecedented death of a sitting emperor in battle, which took place in 251 with Emperor Decius, and Emperor Valerian was captured in 260 CE.
Despite the disasters, there was at least some good news for the Romans. Aurelian and Probus both managed to recover lost territory, and they recovered some of Rome's prestige in doing so. The final turning point came with the accession of Diocletian in 284 CE. From that point on, the empire embarked upon a period of restoration, but before reaching that stage, the empire had no fewer than 20 emperors in those 50 years, even with the exclusion of an additional five Gallic 'emperors' who set themselves up as independent rulers between 260 and 274 CE.
Diocletian's reign would see reforms put into place to achieve the desired end of the Imperial Crisis, and several of the emperors before him may well have had the ability to manage the reform process, but the army's power and willingness to use and abuse power ensured that few of them truly had a chance to really make their marks. It was the worst period in the history of the Roman Empire to that point, even as it forced the Romans to deal with belligerent foreign powers and problems created by the emergence of increasingly powerful and populous provinces.
It would be hard if not outright impossible to overstate the impact Roman Emperor Constantine I had on the history of Christianity, Ancient Rome, and Europe as a whole. Best known as Constantine the Great, the kind of moniker only earned by rulers who have distinguished themselves in battle and conquest, Constantine remains an influential and controversial figure to this day. He achieved enduring fame by being the first Roman emperor to personally convert to Christianity, and for his notorious Edict of Milan, the imperial decree which legalized the worship of Christ and promoted religious freedom throughout the empire. More than 1500 years after Constantine's death, Abdu'l-Bahá, the head of the Bahá'í Faith, wrote, "His blessed name shines out across the dawn of history like the morning star, and his rank and fame among the world's noblest and most highly civilized is still on the tongues of Christians of all denominations."
However, it can be argued that despite his military successes - the most notable of which occurred fighting for supremacy against other Romans - Constantine may well have set the stage for the ultimate collapse of the Roman Empire as it had existed up until that point. It was Constantine who first decided that Rome, exposed and vulnerable near the gathering masses of barbarians moving into Germania and Gaul, was a strategically unsafe base for the empire, and thus expanded the city of New Rome on the Dardanelles straits, creating what eventually became Constantinople. By moving the political, administrative and military capital of the empire from Rome to the East, as well as the Imperial court with all its attendant followers, Constantine laid the groundwork for the eventual schism.

Restoration of Rome, The: The History of the Roman Empire during the Reigns of Diocletian and Constantine