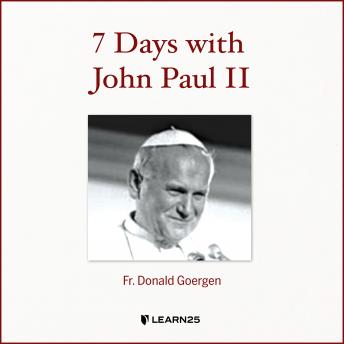 Born in Poland, raised in a Nazi and then Soviet occupied country, creative and courageous from the beginning John Paul II was destined to be pope and guide to the world-wide Church. He became a beacon of hope for millions. He was also a deeply faithful mystic, whose guidance and teachings offer a special path to deepen your life in Christ.

A prolific writer, astute churchman, and defender of human dignity, his contributions are extraordinary. In this special six-part series, let Fr. Goergen prayerfully distill Pope John Paul II's spiritual insights into six retreat conferences that lift your spirit and illuminate your path with Christ. (Photo of Pope John Paul II courtesy of the Library of Congress)