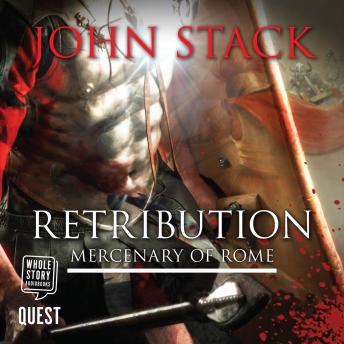 Atticus Perennis, Roman prefect and hero of the seas, is stranded in Carthage.

His Roman masters have all but abandoned him, and at his feet gape the jaws of an angry mercenary army. For while the senators and consuls of Rome bicker and debate, the mercenaries around Utica are running out of patience and strain at the leash, on the verge of war. And then, when a councillor is sent as a message to Atticus and his comrades, all but dead and hideously disfigured, the leash finally breaks...

Aided once more by his comrade Septimus, Atticus the Greek goes to ground and to sea in a strange land, to overcome the raging mercenaries and defend the interests of his adopted home. And as he does so, a story of bloodshed, torture and misery plays out.

Yet, even as the decks of Atticus' galley run dark and sticky with blood, unknown to the Greek something like salvation is sailing towards him, bearing wonderful news and the hope of a better future. Will they meet in time? That may be in the hands of the gods, be they Greek or Roman...

Retribution is the second book in John Slack's Mercenary of Rome series, and picks up the story where bestselling Mutiny ended.