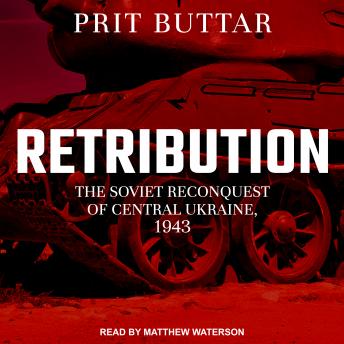 From critically acclaimed Eastern Front expert Prit Buttar comes this detailed and engrossing account of the war on the Eastern Front as the German forces were driven back following the Battle of Kursk.

Making use of the extensive memoirs of German and Russian soldiers to bring their story to life, the narrative follows on from On A Knife's Edge, which described the encirclement and destruction of the German Sixth Army at Stalingrad and the offensives and counter-offensives that followed throughout the winter of 1942-43. Beginning towards the end of the Battle of Kursk, Retribution explores the massive Soviet offensive that followed the end of Operation Zitadelle, which saw depleted and desperate German troops forced out of Western Ukraine. In this title, Buttar describes in detail the little-known series of near-constant battles that saw a weakened German army confronted by a tactically sophisticated force of over six million Soviet troops. As a result, the Wehrmacht was driven back to the Dnepr and German forces remaining in the Kuban Peninsula south of Rostov were forced back into the Crimea, a retreat which would become one of many in the months that followed.