The Return of Depression Economics and the Crisis of 2008 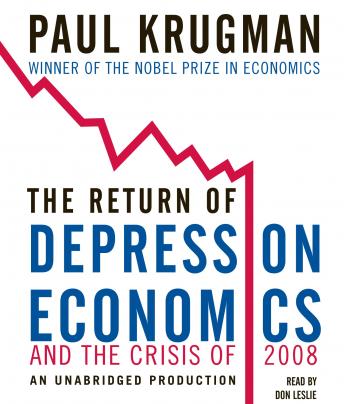 Nobel Prize® winning economist Paul Krugman shows how today's crisis parallels the events that caused the Great Depression - and explains what it will take to avoid catastrophe. In 1999, Paul surveyed the economic crisis that had swept across Asia and Latin America, and warned that those crises were a warning for all of us: like diseases that have become resistant to antibiotics, the economic maladies that caused the Great Depression were making a comeback. In the years that followed, as Wall Street boomed and financial wheeler-dealers made vast profits, the international crises of the 1990s faded from memory. But now depression economics has come to America: when the great housing bubble of the mid-2000s burst, the U.S. financial system proved as vulnerable as those of developing countries caught up in earlier crises - and a replay of the 1930s seems all too possible.
In this new, greatly updated edition of The Return of Depression Economics, Paul shows how the failure of regulation to keep pace with an increasingly out-of-control financial system set the United States, and the world as a whole, up for the greatest financial crisis since the 1930s. He also lays out the steps that must be taken to contain the crisis, and turn around a world economy sliding into a deep recession. Brilliantly crafted in Paul's trademark style - lucid, lively and supremely informed - this new edition of The Return of Depression Economics will become an instant cornerstone of the debate over how to respond to the crisis.

Return of Depression Economics and the Crisis of 2008