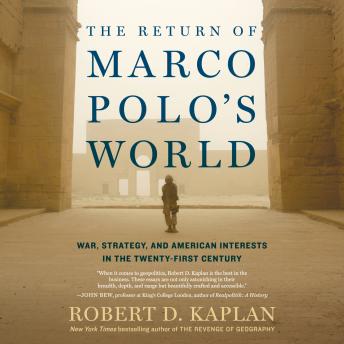 The Return of Marco Polo's World: War, Strategy, and American Interests in the Twenty-first Century

A bracing assessment of U.S. foreign policy and world disorder over the past two decades from the bestselling author of The Revenge of Geography and The Coming Anarchy

“[Kaplan] has emerged not only as an eloquent defender of foreign-policy realism but as a grand strategist to whom the Pentagon turns for a tour d’horizon.”—The Wall Street Journal

In the late thirteenth century, Marco Polo began a decades-long trek from Venice to China along the trade route between Europe and Asia known as the Silk Road—a foundation of Kublai Khan’s sprawling empire. Now, in the early twenty-first century, the Chinese regime has proposed a land-and-maritime Silk Road that duplicates exactly the route Marco Polo traveled.

Drawing on decades of firsthand experience as a foreign correspondent and military embed for The Atlantic, Robert D. Kaplan outlines the timeless principles that should shape America’s role in a turbulent world that encompasses the Chinese challenge. From Kaplan’s immediate thoughts on President Trump to a frank examination of what will happen in the event of war with North Korea, these essays are a vigorous reckoning with the difficult choices the United States will face in the years ahead.

Praise for The Return of Marco Polo’s World

“Elegant and humane . . . [a] prophecy from an observer with a depressingly accurate record of predictions.”—Bret Stephens, The New York Times Book Review

“These essays constitute a truly pathbreaking, brilliant synthesis and analysis of geographic, political, technological, and economic trends with far-reaching consequences. The Return of Marco Polo’s World is another work by Robert D. Kaplan that will be regarded as a classic.”—General David Petraeus (U.S. Army, Ret.)

“Thoughtful, unsettling, but not apocalyptic analyses of world affairs flow steadily off the presses, and this is a superior example. . . . Presented with enough verve and insight to tempt readers to set it aside to reread in a few years.”—Kirkus Review (starred review)