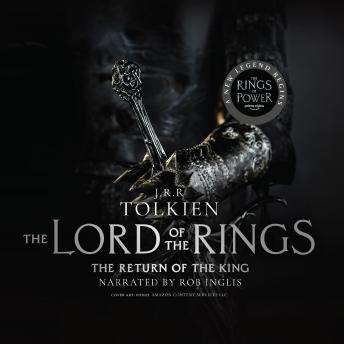 The Return of the King

The Return of the King is the towering climax to J.R.R. Tolkien’s trilogy that tells the saga of the hobbits of Middle-earth and the great War of the Ring. In this concluding volume, Frodo and Sam make a terrible journey to the heart of the Land of the Shadow in a final reckoning with the power of Sauron.

In addition to narrating the prose passages, Rob Inglis sings the trilogy’s songs and poems a capella, using melodies composed by Inglis and Claudia Howard, the Recorded Books studio director. The 13th CD in this recording contains Tolkien’s preface to the trilogy, including a prior history of the ring, and shire habitat,
history, and folkways.

—Also includes The Annals of the Kings and Rulers, an appendix to the Lord of the Rings trilogy.

Love the story. The narrator I could listen to forever.

I love this story

Great reading of this all-time classic!

This book was awesome and the narrator was the best I've heard! He drew me right into the story and was so sorry when it ended!

The narration is not so bad

Great classic of fantasy. A must read of the genre. Also this was very well narrated.

Amazing!! Truly a great book and an epic one for the ages.

Great listen. Love the unabridged version. Narration is on point.

This is a well read version of a delightful classic. I will surely listen to it again in the future!

The CD has everything that a good edition of the book would--Tolkien's Prefaces and the appendixes. As always, the narration is exemplary.