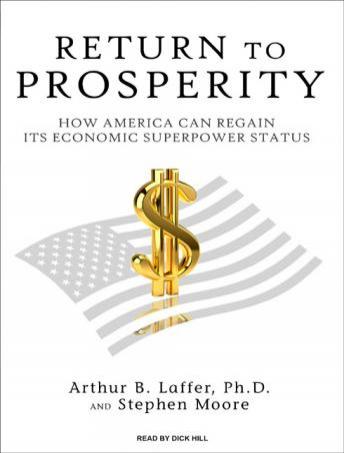 Return to Prosperity: How America Can Regain Its Economic Superpower Status

When Arthur B. Laffer spearheaded the theory of supply-side economics and became a member of President Reagan's Economic Policy Advisory Board, he took his place as an economic icon. More recently, he joined with Stephen Moore and Peter J. Tanous to write The End of Prosperity-a clarion call delineating what is wrong with current political approaches to America's present economic challenges. Steve Forbes himself described The End of Prosperity as 'brilliantly insightful,' saying 'READ IT-AND ACT!'

Now Laffer and Moore follow the rousing success of The End of Prosperity with a book even more vital to America and Americans, delivering a plan that shows how our country can regain its lost prosperity. With the economy flat on its back, unemployment at a twenty-five-year high, and the housing default crisis still worsening, is this even possible? But America can once again become the land of economic opportunity, and this brilliant new book tells us exactly how.

While President George W. Bush and President Barack Obama may hail from different parties, their responses to the crisis have been strikingly similar. The Bush and Obama plans have failed, producing nothing except a cascade of trillions of dollars of debt. Is the situation hopeless?

No, say Laffer and Moore resoundingly, the situation is not hopeless. A return to prosperity is still entirely possible...if the correct strategies are followed. In The End of Prosperity, the authors primarily discussed how lower taxes are essential to economic growth. Now, in Return to Prosperity, they detail the other essential components: putting government at all levels on a low-fat diet; emphasizing debt reduction and retirement; and bringing back the investor class in America, where every American can 'own a piece of the rock.'

In a time where most of the proposed solutions are fraught with peril, the argument provides a refreshing counterbalance. Return to Prosperity is a prescription that gives America the fundamental tools it needs in order to set about recovering. This book is an urgently needed road map to renewed prosperity, and it is vital for anyone who worries that the current economy is faltering, with no clear plan for recovery.

Return to Prosperity: How America Can Regain Its Economic Superpower Status

by Arthur B. Laffer, Stephen Moore