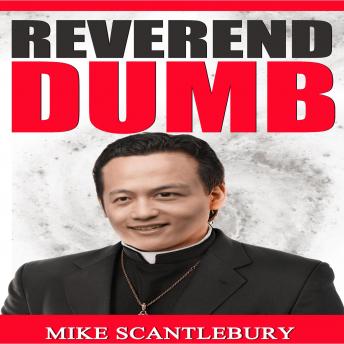 Reverend Dumb: Will the Referendum be murder for Britain?

It's 2016 and Britain is in turmoil. The country is split between those who want to vote to leave Europe and those who want to stay put. It's causing panic in WSB, England's foremost anti-terrorism unit, but Captain Gibson is at his wit's end. His finest agents have been sent over to Europe to help local police cope with the influx of British football fans following their favourite teams in the football World Cup. He's been left with a skeleton crew, including the bare bones that is Deputy Director Caulfield. Gibson hates to take him out from behind his comfortable desk, but someone has to meet the Trade Delegation from China and corral them on trips around Salford and Manchester. Caulfield isn't just bad at the job, he keeps losing them. One by one, the Chinese guys are dying. Now, that's carelessness, indeed. Sure, he has Terry the technician to assist him, but the young man is fine with computers, hopeless with real people. They both miss Mickey, but the big man is in tatters himself. His long-time love, Melia, is in hospital, and he is to be found at her bedside. Doesn't he realise the boys need him? Caulfield can't cope, but what is really galling is that he has been given the job only because of a perceived level of specialised knowledge he has. He served in the Hong Kong police force once and, while he was there, he met the Reverend Umh. Now, that religious gentleman is part of the visiting delegation, and Caulfield is expected to liaise with him. But he can't. The Reverend won't speak. He's dumb! Why, thinks the concerned Mr Caulfield, it's almost as if he isn't the same man at all, not the one he used to know. Could it be true? Is it possible that the man is a fake? And a murderer?

Reverend Dumb: Will the Referendum be murder for Britain?