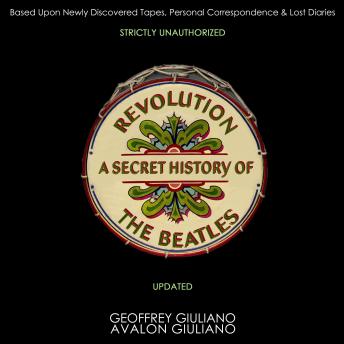 Revolution A Secret History Of The Beatles - Strictly Unauthorized Updated

'This guy knows more about my life than I do.' George Harrison on Geoffrey Giuliano, 1983

'Although I've personally known George Harrison for over twenty-five years, I actually feel a lot closer to the real man after reading Giuliano's masterful book.' Denny Laine, of The Moody Blues and Wings

'Writing about the music is a tricky business. It's only the experience of the music which has meaning. . Giuliano's that one in a million who can whittle down the dreams of an entire generation into something tangible, we can all touch, feel, taste, see, and even hear. That's what the Beatles did too, all those years ago

'Geoffrey is one of a very elite group of writers: those who deal well with the magical spears of our times; those whose tools are their own clear vision.'

'This is a great biography - and Giuliano's a wonderful human to boot.'

Once again internationally acclaimed, best-selling biographers, Geoffrey Giuliano and Avalon Giuliano tear back the decades-old veil of myth and unquestioning hero worship surrounding the Beatles’ turbulent lives and present the frank, often heart-wrenching tale of four young men from Liverpool thrust upon the world stage and into the stratosphere of untouchable super-stardom. Utilizing a wealth of unpublished personal correspondence, never-before-heard taped conversations, obscure studio and home recordings, lost songs and the forgotten diaries the group left behind at the Maharishi’s ashram in 1968, Revolution is the last word on the Beatles' astounding life and times. For the first time, family members, friends, and colleagues speak out exclusively on the often-oppressive constraints of global Beatlemania and the life-changing effect it had on the Boys.

In their own words as well as in the words of those around them, we follow John, Paul, George and Ringo from their childhood in Liverpool and seedy days in Hamburg to the heights of Beatlemania

Revolution A Secret History Of The Beatles - Strictly Unauthorized Updated

This title is due for release on April 11, 2021
We'll send you an email as soon as it is available!