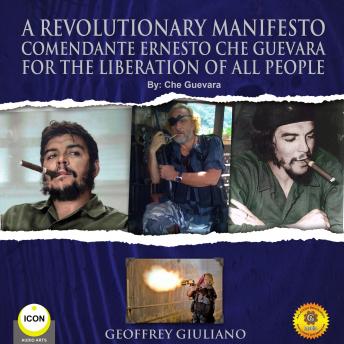 "The revolution is not an apple that falls when it is ripe. You have to make it fall. The life of a single human being is worth a million times more than all the property of the richest man on earth. I am not a liberator. Liberators do not exist. The people liberate themselves." CHE GUEVARA
A unique audio primer and celebration of the inspirational life and great work of revolutionary and social reformer Commandante Ernesto Rafael 'Che' Guevara de la Serna Lynch. Ernesto was born June 14, 1928 in Rosario, Argentina, in a family with aristocratic roots but strong socialistic ideals.
In June of 1955 young Ernesto met Raul Castro. On July 8th Fidel Castro arrived in Mexico to join his brother and Ernesto. When Fidel met Che 'he was already an educated revolutionary." Remembers Castro. The great Cuban revolution against tyranny soon followed and was won chiefly because of the dedication of the Castros and Dr. Guevara.
On October 8, 1967 in the village La Higuera, Bolivia, Che and two comrades fell into the hands of the army. A Bolivian colonel and the representatives of the CIA, arrived by helicopter. It was decided to murder Che and his comrades Willy Cuba and Juan Pablo Chang immediately. A nervous, young low level Bolivian soldier did the job, Che, the icon and hero of all hearts and minds however, lives forever!
Here you will find the absolute perfect audio archive and practical history of one of the most misunderstood and brilliant warrior politicians philosophers of the 20th century. Written and narrated by author actor Geoffrey Giuliano.
GEOFFREY GIULIANO is the author of thirty two internationally best selling books published by the biggest publishers in the world from 1984 until today. He is also an acclaimed Hollywood film actor, director, designer, and is the voice on over 500 popular audiobooks.
Series producer Avalon Giuliano in New York
Produced by Alex Franchi in Milan
Edited and mixed by Macc Kay in Bangkok
ICON intern Eden Garret Giuliano