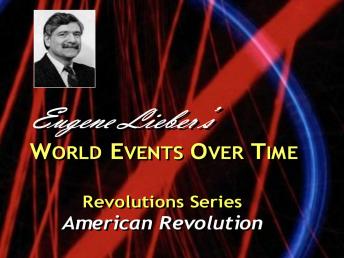 To serve England. 13 American colonies founded to serve England. (02.42.00) = Period of Neglect. 100 year period of neglect by England, factors & results . (07.10.00) = Turning Point. The end of the French & Indian War (7-Years War), is a turning point for the Colonies. (12.44.00) = The Stamp Act Irony. Irony of the 1765 Stamp Act crisis and American resistance. (21.51.24) = Myths. Myths of the Boston Massacre and Boston Tea Party. (25.10.00) = Road to Revolution: How 1775 Battle of Lexington leads to Declaration of Independence. (32.45.00) = The Lost Opportunity for the Declaration of Independence to abolish slavery. (38.45.16) = A Class Society. American colonies as a class society, and role of European Enlightenment. (43.05.00) = Mixed Support. The Colonies' mixed support for revolution which was a violent revolution. (48.08.00) = The Guerilla War. The American Revolution as a guerilla war. (51.20.00) = The Role of Class in the Colonial army. (53.45.00) = Women's Role in the American Revolution changes their status. (55.38.00) = Slaves' Support. Why the slaves were mainly pro-English. (56.48.00) = Native Americans' Support. Why the Native Americans were pro-English. (57.36.00) = France's Help. English response and justifications for the revolution; Ben Franklin's role in enlisting France's help for the Americans. (1.01.01.00) = Battle of Saratoga. The irony of the American victory at Battle of Saratoga, the French role. (1.04.26.00) = English Support. Changing English support, low English troop morale, brutality of Hessian mercenaries. (108.38.00) = Result of Peace Treaty is great increase of American territory. Consequences for political power between the upper and lower classes. International impact of the American Revolution. (1.09.33.00) = Early Govenment Formula. Articles of Confederation reflects increased power of lower classes. Problems with strong state powers and weak federal government. Why the original Articles of Confederation, which is America's law through the 1780's, is more democratic than the US Constitution which replaces it in 1789. (1.13.38.00) = International Impact. Gains of American women, international impact: “Shot heard around world.” (1.6.35.00) = Effect on American History. 1787 Constitution replaces Articles of Confederation, returns power to upper class merchants and planters, reflects founding fathers' negative view of human nature. Bill of Rights for individual rights created later. Why the American Revolution is the cornerstone of subsequent American history.