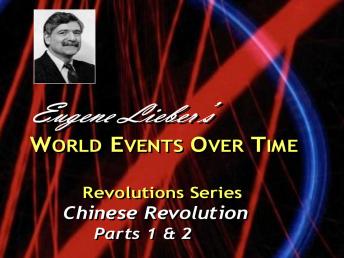 Ancient China. Past glory. Until the 1500s, China is perhaps the most powerful country in the world, reaching back 7,000 years. Sees itself as “the Middle Kingdom” - heaven, China, and everyone else, an attitude of superiority with the rest of the world. The class system in traditional China, exemplified by Confucianism, contributes to the stability of its ruling dynasties - the literate class (emperor, courts, land owners, business) and the peasant class. For a dynasty to fail it must lose support from both classes. Isolation from the rest of the world - the Great Wall of China. (5.30.00) = A remarkable civilization. Parallel development in sections of the world it spread out in. Episodes of authority and power in trade, art (the marvel of the 3,500 figures in the Terracotta Army), government bureaucracy (tests for civil service). Social status by birth. Rigid paternalistic society. (13.35.00) = A sophisticated urban civilization with food supplies for cities. The palace life, the city life. Social support system. (18.10.00) = Contrast with Europe. While Europe is in the backward Middle Ages, China's civilization is remarkable. How Europe of the mid-1600s turns China's isolation into a liability and the cause of its decline using a Chinese invention, gunpowder, against them. (21.50.00) = Early 19th century. England controls India and wants them to sell opium, an addictive drug, to China, an effort to subdue them. The emperor resists but is forced to accept it by military force. The drug affects millions of Chinese. (24.36.00) = Later 19th century. Europe in full industrial stage, needing markets, carves out colonies for exploitation. China is too big so Europe imposes spheres of influence for economic exploitation. China suffers humiliation of loss of political control and discrimination. The Boxer Rebellion against foreigners in early 20th century, and complex reactions to the imperialism of Europeans, including the value of bringing modernity. Being conquered. The contrast of increasing dominance by the Europeans to the prior conquest by the Mongols, when the Mongols become assimilated by the Chinese, a reversal (33.45.00) = Chinese Nationalism. The Chinese Republic. The downfall of the Manchu Dynasty in 1911. Sun Yat Sen, a physician, becomes president of the new Chinese Republic, wants to modernized China to end exploitation. He admires the U.S. modernity but fears its exploitation role. He is sympathetic to the 1917 Bolshevik revolution in Russia and has cordial relations with it, but is not a communist. Communist parties spring up all over the world encouraged by the Bolshevik revolution. Sun Yat Sen, (39.28.00) = Chinese Communist Party springs up in 1921. Russia's advises China's Communist party to cooperate with Sun Yat Sen government because it is too early to oppose it. Sun Yat Sen dies in 1925, and Chang Kai Check becomes president. He is dictatorial and corrupt, and prior reforms end. He suddenly attacks and massacres Chinese communists in port cities, virtually wiping them out. (44.00.00) = Mao as rising star. Mao Tse Tung becomes communist leader. Why, after the Communist defeat and their 6,000 mile "Long March" in the early 1930s, the journalist, Edgar Snow, predicts in his book, "Red Star Over China," that Mao is the future of China.

Chinese Nationalism (continued). Mao's coming to power. What are the 4 events involving Japan that brings Mao to power? The incredible story of Chiang being kidnapped by the Communists after the Japanese invasion, and this arch enemy being released.
(12.24.00) = The Communists win China. The non-ideological reason the Chinese peasants support the Communists. Why the West is shocked and surprised when Chang flees to Taiwan in 1950 and the Communists take full control of China. Because of the Cold War, the U.S. does not recognize China for 24 years until the Nixon presidency in 1969. (18.47.00) = Communist China. The Communist regime. The Communists take power in 1949, enforcing anti-Western extremism. The country is backward, devastated by war, famine. Christian missionaries are expelled. There is a gradual acceptance of cooperative farming. Very substantial accomplishments in literacy, health, food supply, and overcoming lack of technology. (27.34.00) = Mao undermines progress. Mao's brutal determination to maintain the fervor of the revolution undermines the country's progress. “The Cultural Revolution.” “The Great Leap Forward.” (35.42.00) = After Mao's death. The immediate changes in China in 1970s. Economic development now emphasized. Revolutionary fervor mostly gone. Experiences of 30 years of its own version of capitalism. Expected to become the economic superpower of the future, but at an enormous human cost. Increased corruption, consumer society, growing inequality. Peasants not sharing economic development based cheap, exploited labor. China also utilizes cheaper labor outside in countries like India. The traditional subordination of women in China changes for the better and then for the worse. In today's China why the term, "Communist Party," has altered meaning. (41.25.00) = Realities of modern China. The element of nationalism. Marx believed in internationalism, but the realities of wars and revolutions are basically nationalistic. Chinese women, traditionally hobbled by bound feet through the early 20th century, expect revolutions to improve their lot. Yet there is a return to gender subordination now that male births are favored over female in mandatory 1-child families. How the ideals of liberation from oppression have played out. Why the Chinese Revolution is considered an unfinished revolution.