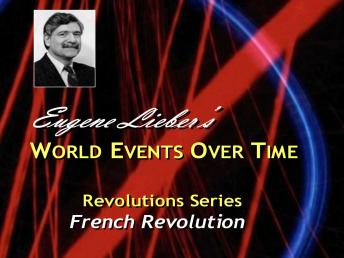 Prelude to Revolution. Absolute divine right monarchy rules France. The lavish spending of King Louis XIV in early 1700s. The crisis of France's large debt incurred helping the American Revolution against England. The class system. Taxing the have-nots. Life on the edge for the peasants and city people. Resentments of the middle class (9.14.00) = The role of the French Enlightenment starting in the late 1600s with the ideas of Voltaire, Rousseau and others. The optimistic view of human nature as rational, with ability to solve problems in this life using science and education. The monarch considered this relatively harmless and did not suppress these ideas. Yet this becomes a threat to the absolute divine right monarchy in the long run. (16.51.09) = Religious enlightenment.. Emerging of concept of deism, that God is a watchmaker, setting things in motion, but does not take part in its operation, contrary to traditional Christian beliefs. (18.07.00) = Estates General (1788-89). Key problem is how to resolve the debt incurred aiding the American Revolution. For the first time in 150 years a meeting of the Estates General is called to solve this by three voting groups: the clergy, and the Third Estate - commoners consisting of the bourgeoisie (the capitalist businessmen), the san culottes (city people), and peasants., voting is skewed in favor of the nobility and clergy. (25.13.00) = The Revolution. First, Moderate Phase (1789-91). The Bastille storming in 1789 as a venting of long simmering anger by the city people. Rural peasants rise up against the nobles, wanting their own piece of land. Many nobles, possibly in shock, flee. (32.19.00) = The Great Fear. The collective mind set of the peasants that they will be slaughtered if the nobles ever come back, engendering great violence against the nobles. The city people in Paris, after 2 years of bad harvests and already dire living conditions, frequently abused by the nobles, but there is no systematic violence yet but potentially ignitable. (37.03) = Declaration of Rights of Man and Citizens. The bourgeoisie write a constitution, form an assembly, propose a constitutional monarchy, rejected by the king. (39.30.00) = Second, Violent Phase (1791-94. Europe, bolstered by exiled French nobles, does not see the French bourgeoisie gains as moderate, is threatened, forms a coalition army and attacks France. (41.52.00) = The Jacobins The “lower bourgeoisie” respond to the attack, and come to power with its leader, Robespierre, forming a coalition with the peasants to fight the European invasion. (46.17.00) = Reign of Terror. Urge for revenge against the nobles. Guillotine claims 17,000, including King Louis XVI and wife, and soon also Robespierre and other Jacobin leaders, leaving a power vacuum. (59.16.00) = Third, Moderate Phase (1794-99). Other segments being exhausted by the long intense struggles so far, the upper bourgeoisie fill the leadership vacuum, consolidating the bourgeoisie gains made in the early phase, and continues to be seen as a threat to Europe which continues its ware against France. There is a brief hint of future class struggle between bourgeoisie and the working class. (1.06.23.00) = Napoleon emerges as modern hero who consolidates capitalist gains for all time, introducing the Napoleonic Code. His mixed motives and achievements. War is not just defensive but Napoleon lusts for power and conquers most of Europe under French control. (1.12.43.00) = Resistance. He brings modernization and necessary reforms to various parts of Europe, but also strong resentment against foreign occupation which meets strong resistance, provoking harsh retaliation. (1.17.07.00) = Invasion of Russia by Napoleon. Napoleon in 1812 is met with retreat and scorched earth tactics, leading to his defeat since he is exposed and unprepared for the brutal Russian winter. The vast majority of his huge army never returns. He returns to France and raises another army, with his final downfall at Waterloo, nd exile to an island, St. Helena, where he dies 6 years later at the age of 51. (1.22.15.00) = Effect of the Revolution is the 1815 meeting of the victors, the English, Austrians, Prussians, and Russia. Royalty returns to rule France and nobles reclaim land, but bourgeoisie gains are there to stay. The victors vow to crush any future revolutions, and act on this. The “White Terror” is inflicted by the upper class who slaughter many peasants when they return and reclaim their land. Lasting effects. The French Revolution colors future world history.