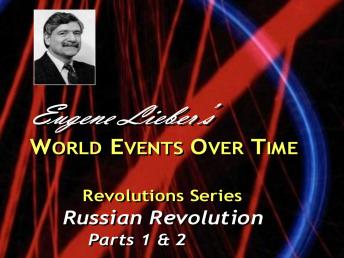 Prelude to Revolution. Marx as the father of Russian Revolution. The backwardness of Russian political and economic life. The split between Mensheviks and Bolsheviks. Lenin leads Bolsheviks for a revolution as quickly as possible. He does not want to wait for the capitalist phase. Bolsheviks become a vanguard party, leading the way. (9.14.00) = Democratic Centralism. The Bolshevik decision making process. Open debate, voting, majority rules, all in party must support the decision. In practice, over time Lenin becomes the decision maker (11.44.00) = The Winter Palace Massacre. Russia goes to war against Japan in 1904 and is easily defeated, causing much discontent at home. Seizing this opportunity, the Bolsheviks mount a revolution at the Czar's Winter Palace in 1905, but the army remains loyal and the rebels are massacred. The Czar defends the massacre, turning sentiment sharply against him for the first time. (17.12.00) = The disaster of WWI. Russia is in alliance with England and France, joins war against Germany. Unprepared and unequipped, Russia suffers an enormous military and human disaster, further diminishing the Czar's public image at home. (18.33.00) = Rasputin. The Czarina is in charge of the Russian government while the Czar is at the front. She is of German descent, leading to questions of her loyalty in the war with Germany. She falls under control of a mad Russian monk, Rasputin, who claims he can cure her son's hemophilia. The Czarina's tie to Rasputin brings the Russian government into more dispute. (22.15.00) = The Revolution. The October 1917 Revolution. Tsar's abdication. The issue of a government's willingness to accept reform to keep power as an alternative to sparking revolution. Bourgeoisie take power. The Karensky government's fatal decision to continue the war under pressure from England and France to continue a two-front war against Germany. (25.52.00) = The return of Lenin who organizes the October revolution, calls for peace, seizes power. The Bolshevik slogan, “Land, Peace, Bread,” attracts wide support. Small in numbers but well organized, the Bolsheviks seize power. Karensky flees. (29.18.00) = The Civil War of 1918-1921. Attacked on all sides by 5 revolutionary armies. Using trains, Trotsky, defeats attacking armies one at a time. End of the Civil War leaves Russia a wasteland with the added toll of the flu pandemic, alone, surrounded by hostile countries. (38.33.00) = Post-Revolution. Lenin expects spread of revolution to world. Doesn't happen. 1921 New Economic Policy is part socialist, part capitalist, ends in 1928 with mixed results. Bourgeoisie doesn't trust the government, won't return with its capital. (42.37.00) = Stalin. Lenin's health declines after an assassination attempt, and dies in January, 1924, at the age of 53. Trotsky is his logical successor, but Trotsky is not charismatic, and lacks political skills. Stalin, not worldly, is a brilliant politician. He manages to win allegiance from many key party members, and eventually becomes Russia's sole ruler.

The Revolution.(continued). Trotsky's fate. As a threat to Stalin, he is removed from office, then from the Party, then is exiled and assassinated in 1940. Because the people are exhausted by now from conflict, Trotsky understood that the Russian people will respond to Stalin's message of building socialism in only their own country, instead of Trotsky's message of sacrifice and struggle for world communism. (8.56.00) = Rapid industrialization. Stalin is firmly in control. He ends the New Economic Policy in 1928, begins 5-Year Plans for rapid economic development which includes collectivization of farms under government ownership and control. Farmers are forcibly removed from farms to cities to work in heavy industry factories making production machinery.
Consumer goods are discontinued. Farmers' resistance is met with harsh repression. In 10 years Russia remarkably industrializes in the 1930s from a backward country, accomplished with heightened brutality which is Stalin's way. Questioning rapid industrialization motivated to face coming Nazi threat. The rapid industrialization started in 1928, much before the emergence of Nazi Germany and any perceived existence of a threat. (17.01.00) = Purge Trials. Stalin's mistrust of the original Bolshevik generation. The 1917 Bolsheviks are tried and confess to absurd charges. All are killed or sent to gulogs, including families. The revolution swallows its own. Possible psychological reason for confessions beyond usual conditions. They are subject to Party discipline all their adult lives. Believe the Party is always right, so we must be guilty if the Party says we are. (19.52.00) = Agriculture becomes the weakest part of the Russian economy for generations, although it is still the major economic segment.. Why the West builds up Germany. Motivation behind the non-aggression pact with Germany. Role of industrialization in withstanding Nazi invasion in 1941. Russia fights 80% of the German army, enduring great horror. WWI ends. (22.45.00) = Nazi aggression in 1939. . With the threat of Nazi Germany including the Spanish Civil War, England and France rebuff Russia's seeking an alliance against Hitler. Hitler cleverly plays on the Western democracies' fear of communism. August 1939 non-aggression pact between Russia and Germany is intended to buy time for Russia to further industrialize. Poland is the sacrificial lamb, with Russia moving into eastern Poland, and Germany attacking western Poland, which begins WWII in September, 1939 (25.38.00) = Nazi invasion of Russia, June, 1941. Stalin is caught flatfooted, is unprepared for the massive assault. He has ignored intelligence about massing of German troops at its border. Russia bears the brunt by fighting 80% of Germany's army. Stalingrad is the turning point, and the Russians begin to push the Germans back. Russia loses from 20-30 million people. Germany is eventually defeated by the Allies. (27.23.00) = The Cold War. Russia's main interest is its own security, is nationalistic, not internationalist. Stalin clamps down on Eastern European countries it has conquered in the war, making them satellite states as a security buffer. Stalin holds trials for doctors, with Jews targeted, for plots against the state. Stalin dies in1953. (29.16.00) = Kruschev.emerges at the top. In the mid-1950s he opens secret files about Stalin's crimes. A slight loosening of control results but the country is still dictatorial. Recovering from WWII devastation to become the world's largest power after the U.S. Hungary and Czech Republic rise up but are crushed by Soviet troops. (32.23.00) = Achievement of Russian Revolution. Free medical & dental care (quality is ofteb poor). Public housing (shoddy). Free education for all (college level greatly restricted). Creative people in art, music, and literature are a privileged class but creativity is dictated, throttled, and many artists flee to the West. The well connected elite have plenty of high end consumer goods, but not the average citizen. (37.27.00) = Last years of communism. Succession of leaders. Leonid Brezhnev is an old liner, likes sports cars. The Cold War and deprivation continue. Mikhail Gorbachev can be credited for ending the Cold War by treaties with the U.S. to reduce Cold War tensions, begins openness and serious reforms, hopes to put a human face on socialism. President Reagan is erroneously credited crumbling Russia's economy with the arms race, but Russia's economy is already weak and heading for a crash before the arms race. (42.10.00) = The Soviet Union collapses in 1991. Gobachev falls from power despite achievements which are too little, too late to change much. The system fails rapidly, surprising the world. Boris Yeltsin brings startling change. Shock therapy of new capitalism with a vengeance. Privileges for the common people are ended. A handful of elite become instantly extremely wealthy, everyone else suffers. The quality of life decreases remarkably since 1991. Ultranationlism emerges, anti-Semitism increases. The new leader, Vladimir Putin is associated with increasing dictatorship. Russia's power is decreased and is t the mercy of a world economy. Concern about control of nuclear weapons. Terrible record on the environment, especially the Chernobyl catastrophe. (52.02.00) = Future of Russia. Dictatorship with the appearance of democratic rule. Putin has virtual control of the media. Opposition parties are throttled. Issue of whether Russia will assert its old power in the future. The failure of the Russian Revolution, but there is the question of what will take its place.