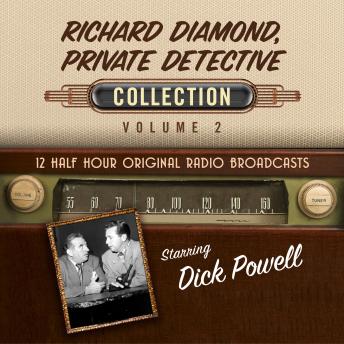 Created by Blake Edwards (of Pink Panther fame), Richard Diamond, Private Detective came to NBC radio in 1949 starring film actor and crooner Dick Powell. Powell had recently played Philip Marlowe in the popular RKO film Murder My Sweet and jumped at the chance to play a suave detective on radio. Richard Diamond was a light-hearted New York-based private eye who enjoyed ribbing the cops and singing songs to his millionairess girlfriend, Helen Asher (played by Virginia Gregg). Its theme “Leave it to Love” was whistled by Powell at the beginning of each episode. Powell’s company (Four Star Television) produced a TV version of Richard Diamond, Private Detective for CBS in 1957. David Janssen, who would later gain fame as Dr. Richard Kimble on The Fugitive was cast as TV’s Richard Diamond. Sam, Diamond’s beautiful secretary in the TV series, was only shown from the waist down. Those beautiful legs belonged to Mary Tyler Moore, as well as other actresses. 8/23/50 “The Farmer-Evans Murders Case”
9/6/50 “The Misplaced Laundry Case”
2/2/51 “The Caspary Case”
2/16/51 “The Grey Man”
2/23/51 “The Lady in Distress”
12/28/51 “The Plaid Overcoat Case”
1/25/52 “The Al Brenners Case”
2/1/52 “The Garrabaldi Case”
2/8/52 “The Eddie Burke Case”
4/4/52 “The Enigma of Big Ed”
6/7/53 “The Cover-Up Murders”
6/28/53 “The Rifle Case”