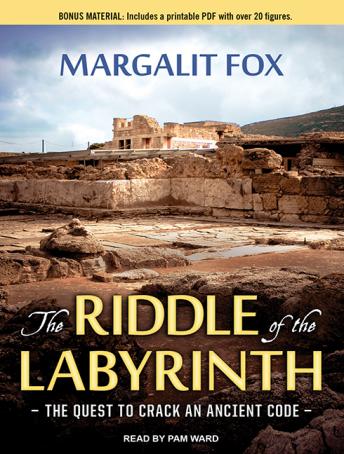 The Riddle of the Labyrinth: The Quest to Crack an Ancient Code

In the tradition of Simon Winchester and Dava Sobel, The Riddle of the Labyrinth: The Quest to Crack an Ancient Code tells one of the most intriguing stories in the history of language, masterfully blending history, linguistics, and cryptology with an elegantly wrought narrative.

When famed archaeologist Arthur Evans unearthed the ruins of a sophisticated Bronze Age civilization that flowered on Crete 1,000 years before Greece's Classical Age, he discovered a cache of ancient tablets, Europe's earliest written records. For half a century, the meaning of the inscriptions, and even the language in which they were written, would remain a mystery.

Award-winning New York Times journalist Margalit Fox's riveting real-life intellectual detective story travels from the Bronze Age Aegean-the era of Odysseus, Agamemnon, and Helen-to the turn of the 20th century and the work of charismatic English archeologist Arthur Evans, to the colorful personal stories of the decipherers. These include Michael Ventris, the brilliant amateur who deciphered the script but met with a sudden, mysterious death that may have been a direct consequence of the decipherment; and Alice Kober, the unsung heroine of the story whose painstaking work allowed Ventris to crack the code.

This title is due for release on September 23, 2013
We'll send you an email as soon as it is available!