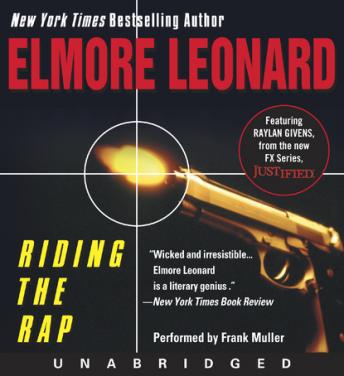 Before U.S. Marshal Raylan Givens began electrifying TV viewers across America (in the hit series Justified), he “starred” in Elmore Leonard’s Riding the Rap—an explosive, twisty tale of a brazen Florida kidnap caper gone outrageously wrong. Chock full of wildly eccentric and deliciously criminal characters—including a psycho enforcer with a green thumb, a Bahamian bad man, and the beautiful, unabashedly greedy psychic Reverend Dawn—Riding the Rap dazzles with Leonard’s trademark ingenious plot turns and razor-keen dialogue. Gripping, surprising, and unforgettable, it is a crime fiction gem that any thriller writer—from past masters John D. MacDonald, Dashiell Hammett, and James M. Cain to the bestselling mystery auteurs of today—would be thrilled to call his own.