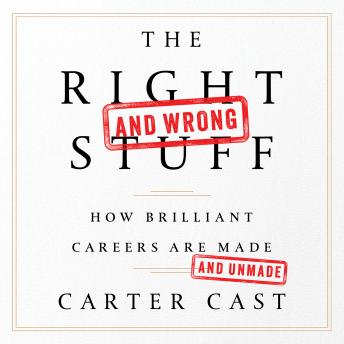 The Right-and Wrong-Stuff: How Brilliant Careers Are Made and Unmade

'Warning: Your career might be in danger of going off the rails. You probably have blind spots that are leaving you closer to the edge than you realize. Fortunately, Carter Cast has the solution. In this smart, engaging book he shows you how to avoid career derailment by becoming more self-aware, more agile, and more effective. This is the book you wish you had twenty years ago, which is why you should read it now.' --Daniel H. Pink, New York Times bestselling author of Drive and To Sell Is Human

The Right--and Wrong--Stuff is a candid, unvarnished guide to the bumpy road to success. The shocking truth is that 98 percent of us have at least one career-derailment risk factor, and half to two-thirds actually go off the rails. And the reason why people get fired, demoted, or plateau is because they let the wrong stuff act out, not because they lack talent, energy, experience, or credentials.

Carter Cast himself had all the right stuff for a brilliant career, when he was called into his boss's office and berated for being obstinate, resistant, and insubordinate. That defining moment led to a years-long effort to understand why he came so close to getting fired, and what it takes to build a successful career.

His wide range of experiences as a rising, falling, and then rising star again at PepsiCo, an entrepreneur, the CEO of Walmart.com, and now a professor and venture capitalist enables him to identify the five archetypes found in every workplace. You'll recognize people you work with (maybe even yourself) in Captain Fantastic, the Solo Flyer, Version 1.0, the One-Trick Pony, and the Whirling Dervish, and, thanks to Cast's insights, they won't be able to trip up your future.