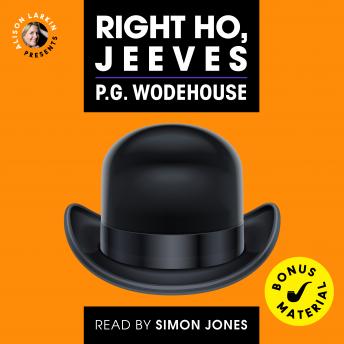 Neil Gaiman once asked Douglas Adams who his literary inspiration was for The Hitchikers Guide to the Galaxy. He said ''P.G. Wodehouse, but nobody ever notices.'" So, with a tip of the hat to Adams' genius, we present his great friend Simon Jones (aka the original Arthur Dent) reading Wodehouse.

What Ho! With his unique blend of tongue-in-cheek humor and gravitas, award-winning narrator and Golden Voice Simon Jones revives the classic pairing of Bertie Wooster and his valet Jeeves in this rollicking new recording of Right Ho, Jeeves. Straight from his role in the eagerly anticipated Downton Abbey movie, Simon brings the charming, wacky world of everyone's favorite bumbling aristocrat, Bertie Wooster, and his brilliant, long-suffering manservant Jeeves to sparkling new life.

Right Ho, Jeeves, first published in 1934, features Bertie and Jeeves installed at Brinkley Court, the home of Bertie's formidable Aunt Dahlia. The usual mayhem betwixt Bertie's friends and relatives ensues, with Bertie inadvertently - and inevitably - fanning the flames of chaos, leaving Jeeves to come to the rescue of all in the end.

BONUS! We've included the first complete Bertie and Jeeves story, "Leave it to Jeeves", as a special addition. Bertie and Jeeves are in New York City and Bertie attempts to aid his artistic friend Corky in his pursuit of love. All goes dreadfully awry and, naturally, only Jeeves can untangle the knots.

The stories are followed by a fascinating interview in which Simon Jones talks with Alison Larkin about England, America, Douglas Adams, P G Wodehouse and his own encounters with the number 42.

This title is due for release on April 10, 2019
We'll send you an email as soon as it is available!