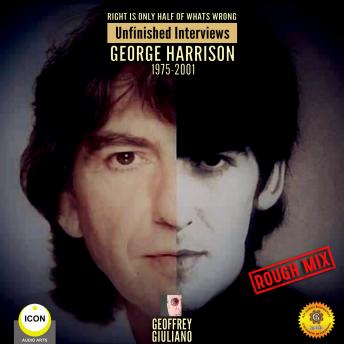 Right Is Only Half of What's Wrong: Unfinished Interviews George Harrison 1975-2001

Here, at last, is what can only be described as a riveting compendium of interviews and quotes directly from the spiritual heart of the Beatles, George Harrison. Sourced from the extensive archives of rock biographer and historian Geoffrey Giuliano, here is the quiet Beatle in his own inspirational words. The innate truth, wisdom, and sincerity of Harrison shines through in this touching audio tribute to the journeyman musician, composer, dedicated yogi, and humble gardener.
Although George insisted he was only a regular guy, there is quite a lot of evidence to the contrary. Throughout his often magical, turbulent, unlikely life, he selflessly raised millions for charity and still does via the good works of his personal charity, The Material World Foundation. He was, too, the grandfather of world music, introducing audiences to be exquisite, ethereal complexity of both Indian music and the spiritually liberating Sanskrit mantras from the 5,000-year-old Vedic scriptures. Harrison was also instrumental in turning on a global audience to ethical vegetarianism, reincarnation, Hare Krishna, meditation, and, yes, even the thoughtful careful use of psychedelic drugs.
In this one-of-a-kind collection, there are no journalists getting in the way of the purity of George's expansive ideas and his carefully told personal history. Here is George Harrison truly in his own words, speaking across the waters of time to generations of dedicated fans still deeply moved by this simple man's great music, philosophical importance, and well-deserved historical significance.
Author Giuliano knew George and even contributed to recordings made in the late 1980s at the former Beatle's Friar Park Studios, working together with former Bonzo Dog Band drummer 'Legs' Larry Smith on a song entitled Mandalay. Here is then the absolutely perfect collection of George Harrison's finest thoughts, recollections, and untold Beatles tales important to the collection of every sincere fan,

Right Is Only Half of What's Wrong: Unfinished Interviews George Harrison 1975-2001