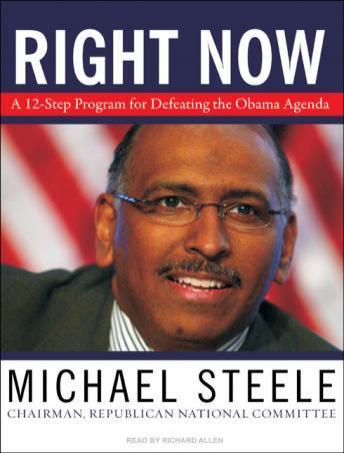 Right Now: A 12-Step Program for Defeating the Obama Agenda

As Republicans look for new ideas to guide them back to power, the Republican National Committee has a new chairman in Michael Steele. In his new book, Right Now, Steele outlines a path for Republicans to reconnect with America and retake the majority. Steele says it's time for the GOP to stop making excuses and take responsibility for its defeats. He argues that the key to rebuilding the Republican party lies in embracing core conservative values and exposing the dangers of Obama's far-left, big-government agenda. Addressing issues from the economy to the environment, Steele proposes a '12-step program' to show how conservative ideas and values make life better for all Americans. Right Now shows how conservatism, not Obama-style socialism, is the surest route to greater prosperity and freedom.

Right Now: A 12-Step Program for Defeating the Obama Agenda