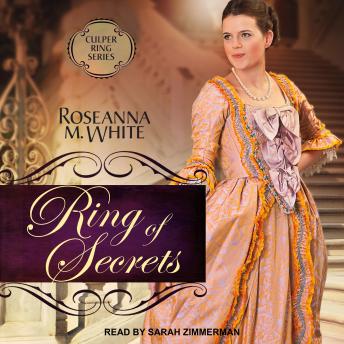 #1 of The Culper Ring Series

This exciting romantic spy novel from Roseanna M. White combines fascinating cloak-and-dagger secrets with a tale of love and intrigue during the Revolutionary War.

Winter Reeves is an aristocratic Patriot forced to hide her heart amid the Loyalists of the City of New York. She has learned to keep her ears open so she can pass information on British movements to Robbie Townsend, her childhood friend, and his spy ring. If she's caught, if she's hung for espionage . . . well, she won't be. Robbie has taught her the tools of the trade: the wonders of invisible ink, drop locations and, most importantly, a good cover.

Bennet Lane returns to New York from his Yale professorship with one goal: to find General Washington's spy hidden among the ranks of the elite. Searching for a wife was supposed to be nothing more than a convenient cover story for his mission, but when he meets Winter, with her too-intelligent eyes in her too-blank face, he finds a mystery that can't be ignored.

Both believers . . . and both committed to a separate cause. Will their faith in God lead them to a shared destiny or lives lived apart?