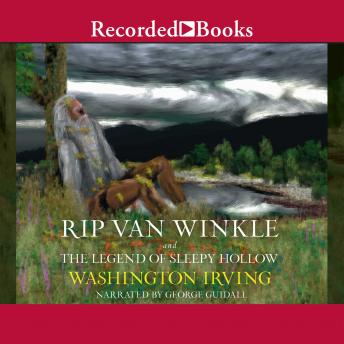 Rip Van Winkle and the Legend of Sleepy Hollow

This selection includes two world-famous children's tales by American author, Washington Irving, well known for his ability to bring humor to the silly vanities that characterize human nature. In the first story, Rip Van Winkle falls asleep only to wake up 20 years later, finding he has literally slept his life away. The Legend of Sleepy Hollow tells the tale of the gawky schoolmaster, Ichabod Crane, and his rival Brom Bones, who each woo pretty Katrina Van Tassel until a Headless Horseman makes his ghostly ride. Washington Irving was one of America's earliest and most popular writers. Famous for his short stories, Irving was also a chronicler of the frontier, a folklorist and a noted political satirist and essayist. In The Sketch Book, of which these two selections are a part, Irving drew upon the myths and legends of local and European folklore. His original creations of characters like Ichabod Crane and Rip Van Winkle have become lasting contributions to our national literary heritage, as distinctly American as Natty Bumppo, Captain Ahab, and Huckleberry Finn.

Rip Van Winkle and the Legend of Sleepy Hollow