The Rise and Fall of Alexandria: Birthplace of the Modern Mind 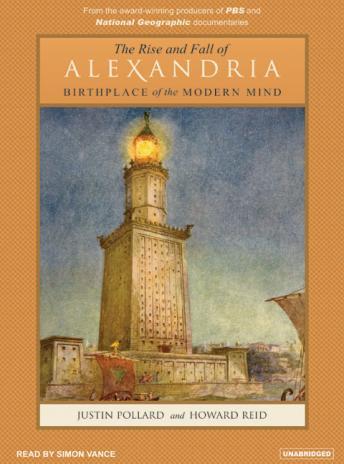 Founded by Alexander the Great and built by self-styled Greek pharaohs, the city of Alexandria at its height dwarfed both Athens and Rome. It was the marvel of its age, legendary for its vast palaces, safe harbors, and magnificent lighthouse. But it was most famous for the astonishing intellectual efflorescence it fostered and the library it produced. If the European Renaissance was the 'rebirth' of Western culture, then Alexandria, Egypt, was its birthplace.

It was here mankind first discovered that the earth was not flat, originated atomic theory, invented geometry, systematized grammar, translated the Old Testament into Greek, built the steam engine, and passed their discoveries on to future generations via the written word. Julius Caesar, Mark Antony, Cleopatra, Jewish scholars, Greek philosophers, and devout early Christians all play a part in the rise and fall of the city that stood 'at the conjunction of the whole world.' Compulsively readable and sparkling with fresh insights into science, philosophy, culture, and invention, this is an irresistible, eye-opening delight.

Rise and Fall of Alexandria: Birthplace of the Modern Mind