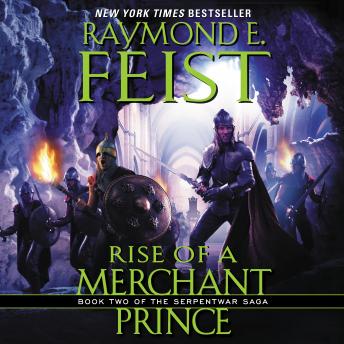 Rise of a Merchant Prince: Book Two of the Serpentwar Saga

“Feist has a natural talent for keeping the reader turning pages.”

The Serpentwar Saga continues! The second book in master fantasist Raymond E. Feist’s New York Times bestselling classic epic fantasy adventure of war, magic, betrayal, and heroism, Rise of a Merchant Prince chronicles the further exploits of the young protagonists of Shadow of a Dark Queen in the aftermath of the initial confrontation with the fearsome reptilian Sauur and the invading armies of the dreaded Emerald Queen. Return once more to Midkemia—and discover why Science Fiction Chronicle calls Raymond E. Feist, “Without question one of the very best writers of fantasy adventure practicing today.” Any reader addicted to the works of Terry Goodkind, George R. R. Martin, and Terry Brooks simply must add Feist’s Serpentwar Saga to his fantasy bookshelf.

Rise of a Merchant Prince: Book Two of the Serpentwar Saga