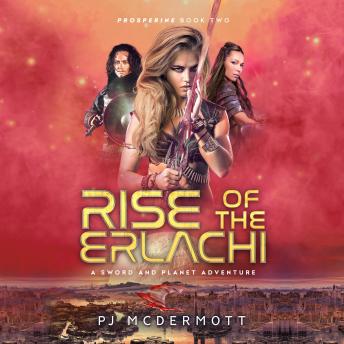 A sword and planet adventure with likable characters, heroic deeds, and exotic alien worlds!On a mission to Prosperine, the Alien Corps' Hickory Lace formed a friendship with the alien mystic, Kar-sèr-Sephiryth. Together, they prevented the Bikashi/Pharlaxian coalition from overthrowing Prosperine's government.

However, the Pharlaxian leader escaped capture, and now he's inciting the northern clans to war. The G.A. wouldn't be interested, except Sequana has stolen a high-tech symbiotic weapon and, in the wrong hands, could become a serious threat to Earth. Hickory and her team are sent to Prosperine to get it back.

If you enjoy the classic scifi stories of Asimov, Herbert, Heinlein, and Anderson, you'll love The Prosperine Series.

Author's note: although, Rise of the Erlachi can be enjoyed as a stand-alone audiobook, to get the most from this sword and planet series, it would be best to start with volume 1, The Alien Corps.