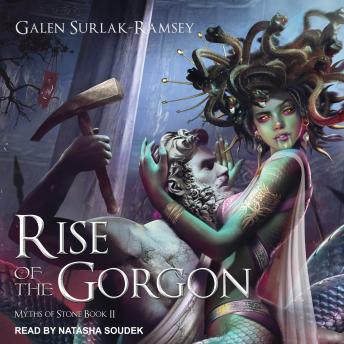 Rise of the Gorgon

#2 of Myths of Stone

BEING IMMORTAL IS GREAT.

Except when you're an outcast. Then it sucks. It really, really sucks. (Really).

Euryale, sister of Medusa, longs to be accepted, but no matter what she does, all she gets is more of the same: heroes who want to kill her; strangers who want to manipulate her; and gods who want to torment her.

But there's only so much a gorgon can take. So when Euryale finally snaps and seeks vengeance, she discovers an ancient being who offers her a way to bring all of her enemies to their knees-if she's willing to pay a hefty price.

And for a girl who's shunned by all, what's one more curse to bear?

Rise of the Gorgon is the wild, adventurous sequel to The Gorgon Bride, but is also a perfect jumping-on point for new listeners.

As a fan of Greek Mythology, I thought, a book about a gorgon, that’s new. I didn’t have a chance to read the first book in this series, so I was a little concerned about missing something important, but the author did a nice job of summing things up. It was easy to get into, plenty of comedy to break up the story, but the middle lagged a little for me. Once the bad guys were revealed though, it ramped back up. One of my favorite parts was when Eurayle brought home a pet. What her kids did when they were threatened by the bad guys was great though. I loved that. Overall, an entertaining story and I would most likely go back to the first book and see what I missed too. I received an eaudiobook arc in exchange for my unbiased review.