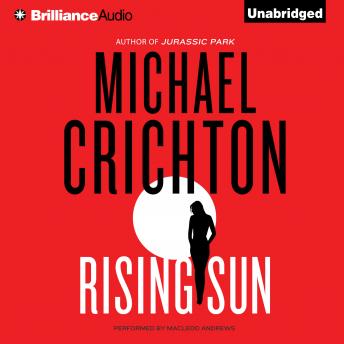 On the forty-fifth floor of the Nakamoto tower in downtown Los Angeles-the new American headquarters of the immense Japanese conglomerate-a grand opening celebration is in full swing.

On the forty-sixth floor, in an empty conference room, the corpse of a beautiful young woman is discovered.

The investigation immediately becomes a headlong chase through a twisting maze of industrial intrigue, a no-holds-barred conflict in which control of a vital American technology is the fiercely coveted prize-and in which the Japanese saying "business is war" takes on a terrifying reality.

Rising Sun was made into a film, starring Sean Connery.

"As well built a thrill machine as a suspense novel can be." -The New York Times Book Review

"A grand maze of plot twists... Crichton's gift for spinning a timely yarn is going to be enough, once again, to serve a current tenant of the bestseller list with an eviction notice." -New York Daily News