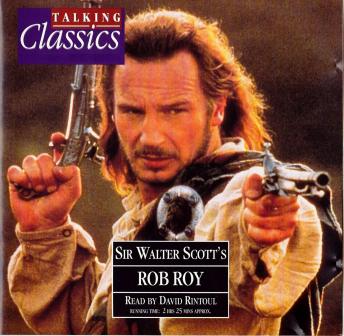 Francis Osbaldistone, in disgrace with his father for refusing to join the family bank, travels north to his cousins' remote house in Northumberland. There, he finds himself caught up in a vicious plot to bankrupt his father which has startling consequences. At the centre of the action are three very different figures ? Francis's treacherous cousin Rashleigh Osbaldistone, who ruthlessly tries to destroy all who interfere in his schemes, the beautiful yet enigmatic Diana Vernon, who adds a romantic element to the story, and Rob Roy, the irrepressible Highland outlaw, who is the ultimate hero of Sir Walter Scott's gripping novel.
1. Defiance - Unhappy home-coming - Meeting at an inn. Francis Osbaldistone returns home after two years abroad. His father William, a London banker, is displeased at Francis's refusal to join the family firm. Mr Osbaldistone threatens to disinherit Francis and favours instead one of his nephews with the position in the bank. He sends Francis to his cousins' home in Northumberland to tie up the arrangements. On the way, Francis meets Mr Campbell, a Scottish cattle-trader who impresses him with his air of authority.

2. Osbaldistone Hall - Encounter on horseback. Nearing Osbaldistone Hall, Francis lets some fox-hunters pass, but two stop ? a young man and a beautiful young woman. They are his cousin Thorncliff and Diana Vernon, also a relation. Diana tells Francis candidly about his six Osbaldistone cousins, all boors apart from the youngest, Rashleigh, who is intelligent and ambitious. Francis is smitten with Diana but she keeps him at arm's length. Francis learns that Rashleigh is to replace him in the bank, a choice endorsed by his brothers as they hate their devious sibling and want him out of the house. Rashleigh clearly has lustful designs on Diana.

3. The Plot Thickens - A traitor revealed - Forced departure. Reproved by Diana for his rudeness, Francis questions her jealously about her feelings for Rashleigh. She replies that she would prefer jail to marrying him. Shortly after, Francis notices strange lights at night in the library where Diana sits, but fails to find them suspicious. In further conversation, Diana reveals that Francis's father has gone to Holland, leaving Rashleigh in control of the bank. When she urges Francis to return to London at once, he protests that he cannot bear to leave her. Next day, she gives him a letter which confirms his father's ruin. She also gives him a packet to be opened in the case of emergency. Francis then leaves for Glasgow to meet Owen, his father's head clerk, and to look for Rashleigh, engineer of his father's woes.

4. An Encounter - A mysterious guide - Bailie and the outlaw. In Glasgow, Francis is warned by a mysterious stranger that he is in danger. That night, he follows this mysterious figure to Glasgow prison where he finds Owen, jailed by some of his father's corrupt associates. They are interrupted by loud knocking and Francis's companion tries in vain to hide. Nicol Jarvie, a business associate of the family firm, arrives to see Owen. He promises to free him, then amazedly recognizes the guide as his cousin Rob Roy, a famous outlaw. Francis opens Diana's packet which contains a sealed letter for Rob Roy.

5. Into Danger - The Bailie explains. Francis recognizes his guide as the man Campbell whom he met on his journey north. Rob Roy reads the letter and tells Jarvie and Francis to meet him again in the Highlands. Next day Jarvie explains how Rob was driven by the English to become an outlaw, and how Rashleigh is using the bank's resources to stir up rebellion. Together Francis and Jarvie ride to Aberfoil to meet Rob Roy, but instead they are arrested by an English officer. Dougal, Rob Roy's man, is also caught and forced to divulge the whereabouts of the outlaw.

6. Capture and Escape - An heroic wife - Meeting by moonlight. The soldiers escorting Jarvie and Francis are ambushed by Highlanders. These are clansmen of Rob Roy and are led by his wife Helen. However, triumph turns to grief when news comes of Rob's capture. Helen soon frees Francis to take a message demanding her husband's release to Rob's captors. This is refused but, as the militia cross a river, Rob Roy escapes. Francis follows suit and on a moonlit road, he is overtaken by riders ? Diana Vernon and an unknown man. She gives Francis documents stolen by Rashleigh and then bids him adieu and is gone, leaving him heartbroken. Rob Roy joins him on the road and from his comments, Francis concludes that Diana is a Jacobite and that her companion is her husband.

7. Doomed Rising - Unexpected inheritance. Back in Glasgow, Francis is reconciled with his father. William has restored his financial affairs to a strong footing. They return to England to avoid the Jacobite rebellion. All Francis's cousins, excepting Rashleigh, join the rising and are killed. Francis becomes heir to Osbaldistone Hall, for Sir Hildebrand has disinherited Rashleigh as a traitor. Going north to claim his inheritance, Francis learns that Diana's 'husband' is in fact her father, and that Rashleigh is contesting the will. Suddenly, Diana and her father Sir Frederick arrive and ask for refuge.

8. The Final Conflict - A cousin's revenge - Happy endings. A violent knocking at the door signals that Rashleigh has arrived in hot pursuit. Diana and her father are caught and, with Francis, are arrested. Rashleigh boasts that he is now the rightful owner of the Hall. However, on their drive through the park they are stopped by Highlanders. Rashleigh is killed by Rob Roy and curses Francis with his last breath. The outlaw helps Sir Frederick and Diana to escape and Francis regains possession of the Hall. With his father's consent, he woos and marries Diana. Rob Roy survives to die in old age.