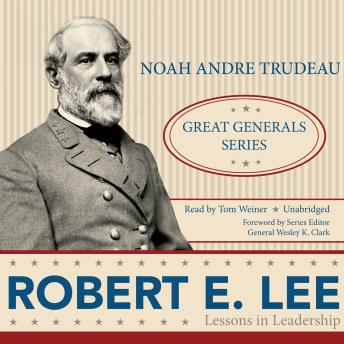 General Robert E. Lee was a complicated man and military figure.  In Robert E. Lee, the eleventh book in the critically acclaimed Great Generals Series, Noah Andre Trudeau follows the general's Civil War path with a special emphasis on Lee's changing set of personal values as the conflict wended through four bloody years, offering tantalizing glimpses into Lee’s character and exploring his famous skills as a crafty and daring tactician. This insightful new account delivers a fresh perspective on one of the most beloved and enigmatic military leaders of all time, as well as on the war that divided our nation and led to many of the sectional political issues that have since cast a long shadow over American politics.

“For a century after the death of Robert E. Lee in 1870, his image achieved iconic status in the South—and beyond. In recent decades, however, historians have discovered a flesh-and-blood Lee who is far more complex and interesting than the marble man of yore. Trudeau’s fast-paced biography offers a well-rounded portrait of Robert E. Lee.”—James M. McPherson, bestselling author of Battle Cry of Freedom