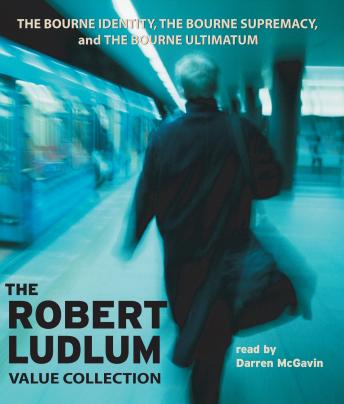 THE BOURNE IDENTITY-He is a man with an unknown past and an uncertain future. A man dragged from the sea riddled with bullets, his face altered by plastic surgery-a man bearing the dubious identity of Jason Bourne. Now he is running for his life, the target of professional assassins, at the center of a maddening deadly puzzle. Who is Jason Bourne? To answer that question, he must find the secret buried deep in his own past. And the only one who can help him is a beautiful stranger-the woman who once would do anything to escape him.

THE BOURNE SUPREMECY-The Vice Premier of the People's Republic of China is brutally slain in a Kowloon cabaret, and all the clues point to the legendary assassin, Jason Bourne. But Bourne never existed! The name was created as a cover for ace agent David Webb on his search for the notorious killer Carlos. Now someone else has resurrected the Bourne identity, and Webb is forced to use his murderous skills to stop him. Because once again, like a nightmare relived, the woman he loves is suddenly torn from his life. To find her, to trap his own imposter, Webb must launch a desperate odyssey into the killing fields of international espionage.

THE BOURNE ULTIMATUM-Thirteen years have passed since David Webb was last forced to assume the alias of the assassin Jason Bourne. Thirteen blissfully peaceful years: time enough to raise a family with his wife Marie, time enough to begin to put the violence and betrayal of the past behind him. Now with one phone call Webb is thrust back into the madness. His greatest enemy, Carlos, is hunting again-determined to stalk and eliminate the one man whose reputation as an assassin approaches his own, a determination that promises pain and death for David Webb and those who mean the world to him.

This title is due for release on February 8, 2005
We'll send you an email as soon as it is available!