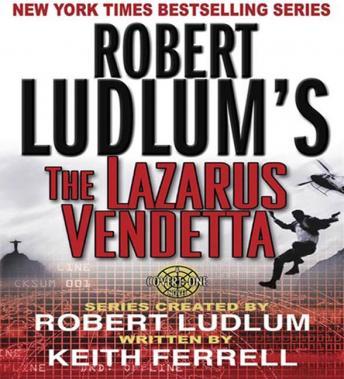 The thrilling new novel in the bestselling Covert-One series. The previous Covert-One audiobook, Robert Ludlum's The Altman Code, spent three months on the Publishers Weekly Audio Bestseller list
In the increasingly turbulent atmosphere of international politics, the once-grassroots anti-globalization movement has been slowly absorbed and taken over by the underground radical anti-technology group fronted by the mysterious figure known only as Lazarus. All attempts to infiltrate the group have failed, the intelligence agents involved have all disappeared without a trace. Now a sudden surge in the 'deep chatter' detected by U.S. intelligence leads everyone to believe one thing-Lazarus is preparing to make his boldest move yet.
With Lazarus bringing deadly pressure to bear against the leading research facilities focusing on nano-technology, Lt. Col. Jon Smith-publicly a researcher for USAMRIID-is activated by Covert-One to bring his skills to bear in uncovering the truth behind the terrorists. With his friend and cohort CIA agent Randi Russell missing in the field, and with the help of former MI6 agent Peter Howell and computer whiz Marty Zellerbach, Jon Smith must find and uncover the truth about Lazarus where all others have failed. For unbeknownst to the world at large, the Lazarus Movement is only the tip of the iceberg in a scheme that will risk the lives of billions and forever change the world itself.