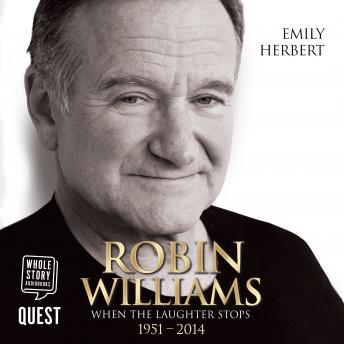 With his twinkling eyes, boundless energy and unrivalled natural wit, Robin Williams was the comedian who brought laughter to a generation.Through roles in cherished films such as Mrs. Doubtfire, Jumanji, Aladdin and Hook, he became the genial face of family comedy. His child-like enthusiasm was infectious, sweeping viewers away. Allied to his lightning-quick improvisation and ability to riff lewdly off any cue thrown at him, Robin was that rare thing - a true comic genius who appealed to adults and children equally.He could also play it straight, and empathetic depth came to him naturally. A poignant performance in Good Will Hunting won him an Academy Award whilst his masterfully chilling turn in psychological thriller Insomnia shocked audiences and hinted at a darker side.What truly caught the imagination, though, was his good-heartedness. Warmth radiated from him on-screen, but he was legendary for his off-screen acts of selfless generosity. Where most Hollywood A-listers demand outrageous pampering in their contract riders, he always insisted that the production company hire a full quota of homeless people to help make his movies.But behind the laughter lay a deeply troubled man, and tragedy would follow. At midday, on 11 August 2014, Robin Williams was pronounced dead at his California home. The verdict was suicide. He had battled depression and addiction for many years and was allegedly beset by financial difficulties.Virginia Blackburn's sensitive and thoughtful biography celebrates his genius and warmth, but also attempts to understand what could have driven such a gentle and gifted man to so tragic an end.

This title is due for release on July 19, 2018
We'll send you an email as soon as it is available!