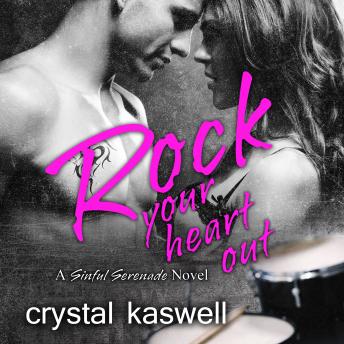 Rock Your Heart Out

Willow Denton needs to get out of town fast. Her only option is joining her brother's band on tour. Two months with misbehaved men doesn't sound so bad. Until she walks in on the drummer naked and sporting a spanking new piercing right between his legs. There's no way the cocky player will ever think of her as more than his friend, or worse, his BFF's little sister. Better to focus on her photography. As soon as she stops thinking about him in her bed, against the wall, in the backseat of his car . . .

Sinful Serenade drummer Tom Steele is a wrecking ball. Bossy. Pushy. Hot as the molten center of the Earth. He's not afraid to use his body or his fame to get what he wants-a different girl every night of the week (and three on Sunday). The man may be a slut but he can control himself. He's going to keep an eye on Willow. That's it. He's not about to throw away their budding friendship, or his relationship with her overprotective brother, for a good time.

Their sizzling sexual chemistry makes this whole platonic things hard. But there's no way he'll cross the line with the girl he's supposed to protect.

Rock Your Heart Out