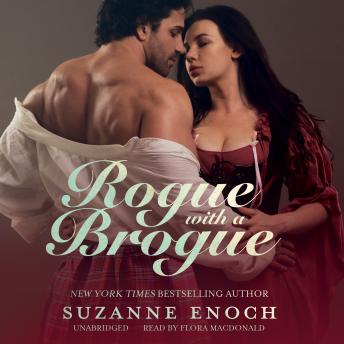 Rogue with a Brogue

A rogue for every lady
London, 1817. Stuck in a Mayfair ballroom thanks to hislove-struck brother, highlander Arran MacLawry wants nothing but a bit of distractionfrom an arranged betrothal, and a clever, auburn-haired lass in a vixen maskpromises just that-until he discovers that she's the granddaughter of theCampbell chief, clan MacLawry's longtime rival. Despite their families' grudgingtruce, falling for fiery Mary Campbell is a notion too outlandish even for thisHighlander.
The thrill of theforbidden
Raised on tales of savage MacLawrys, Mary is stunned torealize that the impressively strapping man in the fox mask is one of them. Surelythe enemy shouldn't have such a broad chest and such a seductive brogue. It's notthat her curiosity matters as any dalliance between them is strictly forbidden,and she is promised to another. But with the crackling spark between them readyto catch flame, love is worth every risk.

Rogue with a Brogue