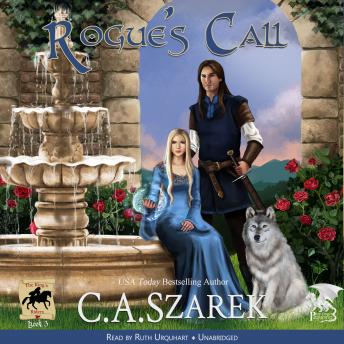 She's on the run, but doesn't know it

Raised in the security of the king's castle, Lady Elissa Durroc remembers nothing of the death of her family or how she survived it. As an elemental mage with control over all four elements, her powers are rare. And coveted by dark magic. None darker than the mage who killed her parents.

When the king learns the mage knows Elissa is alive, he orders her to Greenwald under the guise of choosing a husband. Her protection falls to Sir Alasdair Kearney, a knight whose prowess on the battlefield is rivaled only by his appetite for women.

Alasdair's not sure what to make of being a glorified nursemaid, despite Elissa's beauty and intriguing magic. The rogue has rules. Rules that don't involve being tempted by his noble charge.

Elissa is drawn to the knight, even though he's not on her list of suitors. Can she guard her heart and her magic? And when the dark mage comes after her, will it be too late to matter?

This title is due for release on May 24, 2017
We'll send you an email as soon as it is available!