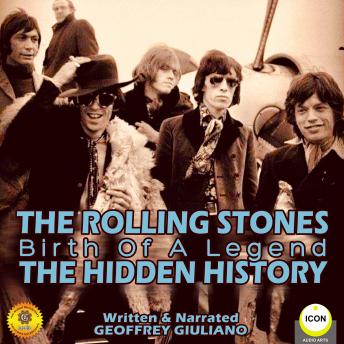 The Rolling Stones: Birth of a Legend - The Hidden History

Although mountains have been written and said about the greatest rock 'n' roll band in the world, here at last, the Rolling Stones have the opportunity to speak for themselves. In this one-of-a-kind audiobook from music historian and author Geoffrey Giuliano, the very best of what the Stones have had to say over the past five decades is presented as an exciting audio collage for friends, fans, students, and scholars alike. A true Rolling Stones collectible.
Geoffrey Giuliano is the author of 32 biographies on the Beatles and other iconic rock groups of the 1960s. He is also a screenwriter, the voice on more than 500 popular audiobooks, and an actor in 25 films.
Series producer Avalon Giuliano based in New York. Produced by Alex Franchi in Milan. Edited and mixed by Macc Kay in Bangkok. ICON intern Eden Garret Giuliano. Music by AudioNautix.

Rolling Stones: Birth of a Legend - The Hidden History