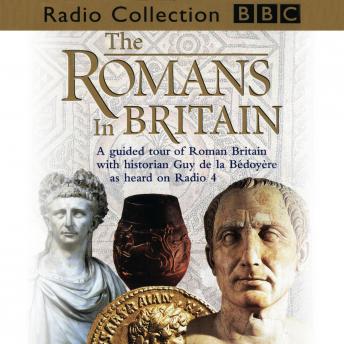 A guided tour of Roman Britain with historian Guy de la Bédoyère, as heard on BBC Radio 4. In 55 BC, Julius Caesar invaded Britain, which was then on the edge of the known world. But he was unable to conquer it. Where Caesar failed the Emperor Claudius, in AD 43, succeeded and the mighty Roman Empire came to stretch from Cairo to Carlisle. The Romans in Britain tells the story of four hundred tumultuous years under Roman rule. A colourful and cosmopolitan people, the Romano-British created a unique corner of the ancient world by merging their own Celtic traditions with the sophistication of Roman civilization. Presented with warmth and wit, historian and archaeologist Guy de la Bédoyère takes us on a fascinating tour through Britain which is as much an adventure in social geography as it is a lively and surprising history.