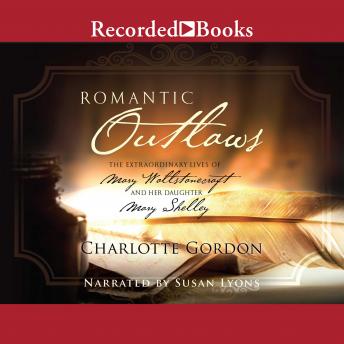 Romantic Outlaws: The Extraordinary Lives of Mary Wollstonecraft and her daughter Mary Shelley

Charlotte Gordon's new work is a fresh look at the lives of Mary Wollstonecraft and Mary Shelley, who together comprise one of the most illustrious and inspiring mother-daughter pairs in history. Wollstonecraft published the first full articulation of women's rights in 1792, risking her reputation and sometimes her life in pursuit of her radical goals, while her daughter Mary Shelley wrote the masterpiece Frankenstein in 1819, and famously professed her love to the poet Percy Shelley on her mother's grave. Although these two women never really knew each other, their lives were so closely intertwined and eerily similar that it seems impossible to consider one without the other: both became writers; both fell in love with brilliant but impossible men and were single mothers who had children out of wedlock; both struggled to negotiate their need for love and companionship with their need for independence. The narrative takes readers from Revolutionary France to the Scottish Highlands, from Victorian England to the canals of Venice, reading like an engrossing historical novel.

Romantic Outlaws: The Extraordinary Lives of Mary Wollstonecraft and her daughter Mary Shelley