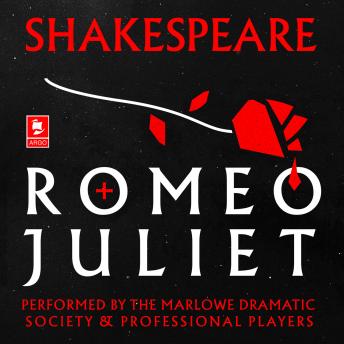 William Collins Books and Decca Records are proud to present ARGO Classics, a historic catalogue of classic prose and verse read by some of the world's most renowned voices. Originally released as vinyl records, these expertly remastered stories are now available to download for the first time.


'Did my heart love till now? Forswear it, sight!
For I ne'er saw true beauty till this night.'


Arguably the greatest love story ever told, Shakespeare's Romeo and Juliet continues to touch modern audiences with its passionate depiction of the tragic romance between two young lovers. With a bitter feud between their respective families, Romeo and Juliet's love is troubled from the start, and through their relationship, Shakespeare shows the fine line between love, hatred, comedy and tragedy.


All of the Shakespeare plays within the ARGO Classics catalogue are performed by the Marlowe Dramatic Society and Professional Players. The Marlowe was founded in 1907 with a mission to focus on effective delivery of verse, respect the integrity of texts, and rescue neglected plays by Shakespeare's contemporaries and the less performed plays of Shakespeare himself. The Marlowe has performed annually at Cambridge Arts Theatre since its opening in 1936 and continues to produce some of the finest actors of their generations.