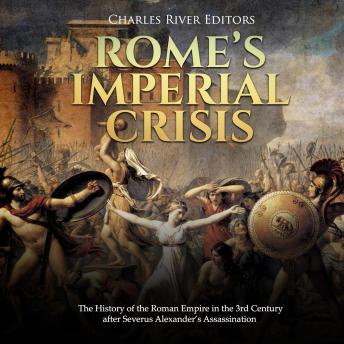 Rome’s Imperial Crisis: The History of the Roman Empire in the 3rd Century after Severus Alexander’s Assassination

The 50 years following the assassination of Severus Alexander on March 19, 235 CE has been generally regarded by academics as one of the lowest points in the history of the Roman Empire. This stands in stark contrast to the previous 150 years, which included the reigns of the Five Good Emperors and has been universally praised as one of the high points of the empire. Severus Alexander was the last of the Severan emperors, and the subsequent years of crisis (235-285 CE) were characterized by a series of short reigns, usually ending in the violent death of the reigning emperor.

At the same time, this period of time also saw the empire beset by threatening forces on all sides. The Romans faced a newly resurgent Persia in the east, as well as significant forces from German tribes on the Rhine and Goths along the Danube. The various conflicts would result in the unprecedented death of a sitting emperor in battle, which took place in 251 with Emperor Decius, and Emperor Valerian was captured in 260 CE.

Despite the disasters, there was at least some good news for the Romans. Aurelian and Probus both managed to recover lost territory, and they recovered some of Rome’s prestige in doing so. The final turning point came with the accession of Diocletian in 284 CE. From that point on, the empire embarked upon a period of restoration, but before reaching that stage, the empire had no fewer than 20 emperors in those 50 years, even with the exclusion of an additional five Gallic 'emperors' who set themselves up as independent rulers between 260 and 274 CE.

Diocletian's reign would see reforms put into place to achieve the desired end of the Imperial Crisis, and several of the emperors before him may well have had the ability to manage the reform process, but the army’s power and willingness to use and abuse power ensured that few of them truly had a chance to really make their marks. It was the worst period in the history of the Roman Empire to that point, even as it forced the Romans to deal with belligerent foreign powers and problems created by the emergence of increasingly powerful and populous provinces.

The pressures created by population growth, both within the empire and outside of it, have been thoroughly researched, but more recently, issues created by climate change have also commanded attention. The previously held assumption was that population increases in modern Germany and further east pushed hostile groups into Roman territory, and it is now believed that in the 2nd century CE, climate change led to significant rises in sea levels that caused massive flooding and the destruction of crops in Eastern Europe. This may have given people the impetus to migrate south and west, at the very time Rome was focused on containing the Sassanid Persian Empire. It is often overlooked that the Persian Empire was every bit as large as that of the Romans and equally well developed militarily during this period, which explains the difficulty Rome had in their relations.

As Roman leaders vied with each other for power and constantly fought civil wars, Rome’s famous roads fall into disrepair, the economy was crippled, the continent-wide trade system that had flourished in the previous years was replaced with a basic barter system, and there was a reduction in international trade. People became ever more fearful for their personal safety, and the Imperial Crisis saw an increasing trend toward sacrificing personal liberties and rights in return for guarantees of safety from wealthy landowners. All of this foreshadowed the emergence of the European feudal system and serfdom.

These were obviously turbulent times, and given the volatility, many historians have debated how the Roman Empire managed to survive in any form at all, let alone remain robust enough to allow Diocletian and his successors to restore it.

Rome’s Imperial Crisis: The History of the Roman Empire in the 3rd Century after Severus Alexander’s Assassination

This title is due for release on March 11, 2019
We'll send you an email as soon as it is available!