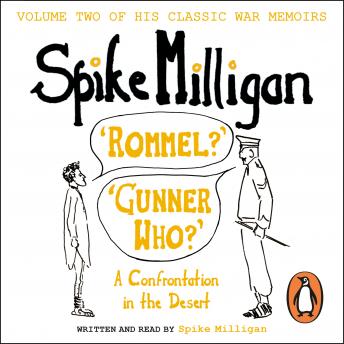 'Rommel?' 'Gunner Who?': A Confrontation in the Desert

'Keep talking, Milligan. I think I can get you out on Mental Grounds.''That's how I got in, sir.''Didn't we all.'

The second volume of Spike Milligan's legendary recollections of life as a gunner in World War Two sees our hero into battle in North Africa - eventually. First, there is important preparation to be done: extensive periods of loitering ('We had been standing by vehicles for an hour and nothing had happened, but it happened frequently'), psychological toughening ('If a man dies when you hang him, keep hanging him until he gets used to it') and living dangerously ('no underwear!'). At last the battle for Tunis is upon them...

'Rommel?' 'Gunner Who?': A Confrontation in the Desert