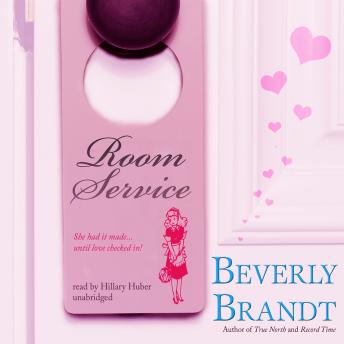 Jet-setter Katya Morgan believes that love comes in gilt-wrapped packages. So when her father disinherits her, her first priority is to get her money and her cushy life back. But meanwhile, having no way to pay the enormous bill she racked up at the sumptuous Royal Palmetto Hotel poses a slight problem. Then Alex Sheridan, the hotel manager, has the gall to suggest that she pay off her debt by working at the hotel—as a maid!
Alex doesn’t much care for the spoiled Ms. Morgan at first, but when she dons the uniform and proves her mettle as a housekeeper who cares about more than cold, hard cash, he begins to change his mind. When a rash of disasters befalls his beloved hotel, Alex finds himself dealing with a saboteur, just as he is beginning to fall for the once-spoiled brat who’s acting more and more like a real woman every day.

This title is due for release on March 4, 2010
We'll send you an email as soon as it is available!