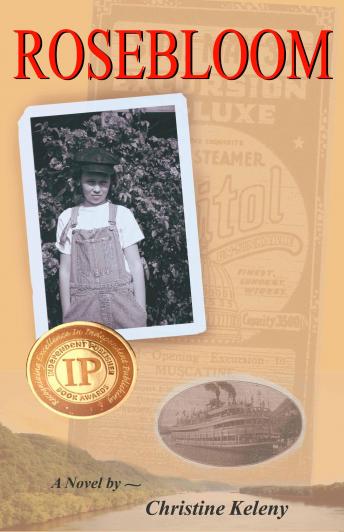 Book I of the Rose Series. ~ IPPY AWARD WINNER for Historical Fiction~

Midwest Book Review referred to it as “...an excellent blend and deftly written look at 1930s America in between the Great Depression and the second Great War – highly recommended for fans of coming of age fiction...”

Library Journal review of the audio books give it a 'Recommended' status:' Keleny details her [the main character's] journey and the myriad of characters she encounters in an enjoyable and entertaining way.'

Rose is thrown into the lives of the varied people and towns of the Mississippi while working on river boats, going to a prep school in St. Louis where she lives with a black family in the Ville, and working in a bordello in New Orleans (not as a call girl, of course. She is a Catholic girl from the Midwest after all). What she doesn’t anticipate are the close relationships that develop with many of the women she encounters. She also discovers the harshness of the world far away from the security of home. Ultimately, Rose realizes what is most important in her life: her family and her friends. Rosebloom takes place at a time in history that buffets Rose between the great depression and the coming wave of World War II. She gets herself into situations through her naiveté and also just by chance that test her resolve and teach her not only about herself but about the world of others which she would have never know if she hadn’t left her small farm in Southwest Wisconsin.

Judges of the IPPY award called Rosebloom “A wonderful portrait of life on the river....” “Rose is a female Huckleberry Finn.”

Of the author; “(Christine is) A soulful and lively writer.” Christine Keleny spent over four years and traveled over 3500 miles to seven river towns in five states to write a story of her own, this one fictional.

This title is due for release on January 11, 2020
We'll send you an email as soon as it is available!