Rosewater: Previously published as 'Then They Came For Me' 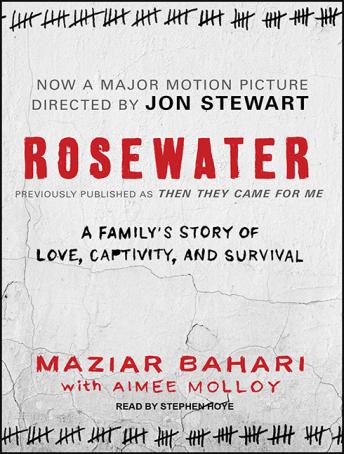 When Maziar Bahari left London in June 2009 to cover Iran's presidential election, he assured his pregnant fiancee, Paola, that he'd be back in just a few days, a week at most. Little did he know, as he kissed her good-bye, that he would spend the next three months in Iran's most notorious prison, enduring brutal interrogation sessions at the hands of a man he knew only by his smell: Rosewater.

For the Bahari family, wars, coups, and revolutions are not distant concepts but intimate realities they have suffered for generations: Maziar's father was imprisoned by the shah in the 1950s, and his sister by Ayatollah Khomeini in the 1980s. Alone in his cell at Evin Prison, fearing the worst, Maziar draws strength from his memories of the courage of his father and sister in the face of torture, and hears their voices speaking to him across the years. He dreams of being with Paola in London, and imagines all that she and his rambunctious, resilient eighty-four-year-old mother must be doing to campaign for his release. During the worst of his encounters with Rosewater, he silently repeats the names of his loved ones, calling on their strength and love to protect him and praying he will be released in time for the birth of his first child.

A riveting, heart-wrenching memoir, Then They Came for Me offers insight into the past fifty years of regime change in Iran, as well as the future of a country where the democratic impulses of the youth continually clash with a government that becomes more totalitarian with each passing day. An intimate and fascinating account of contemporary Iran, it is also the moving and wonderfully written story of one family's extraordinary courage in the face of repression.

Rosewater: Previously published as 'Then They Came For Me'