Roswell: The Ultimate Cold Case; Eyewitness Testimony and Evidence of Contact and the Cover-Up 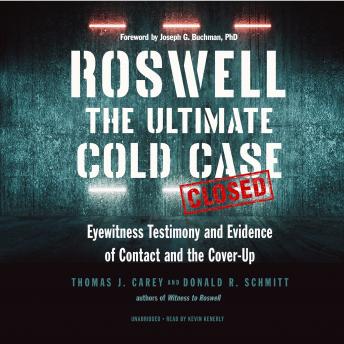 Two of the world’s leading investigators declare definitively that the Roswell Incident happen and present their closing arguments.

For more than seventy years, the crash at Roswell and its ensuing controversies and cover-ups have been investigated, and yet despite continually mounting evidence there are still disbelievers. Roswell: The Ultimate Cold Case is Carey and Schmitt’s final and commanding word on the case in which they declare victory once and for all.

The government has changed their official story on Roswell more than a dozen times, but the witnesses have not recanted. The evidence has not gone away. And won’t go away. The Roswell Incident is the most hotly debated and investigated UFO crash in history, with a seemingly endless supply of evidence and eyewitnesses coming forward even years later. Finally, late in life people feel safe enough or duty bound to reveal what they know, saw, and heard.

Roswell: The Ultimate Cold Case will bring all new exclusive eyewitness testimonies to light, as well as cover the

connection of astronauts Edgar Mitchell and Neil Armstrong to Roswell;connection of Clinton, Carter, Goldwater, Schiff, and Richardson to Roswell;first time artist conception of the impact site with craft and bodies based on firsthand testimony;first time full-size model of the crash survivor based on eyewitness testimony; andmore eyewitness corroboration.

Roswell: The Ultimate Cold Case; Eyewitness Testimony and Evidence of Contact and the Cover-Up