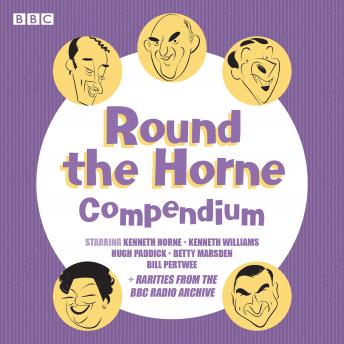 In this exhaustive collection of rare material, two complete episodes - Series 1, Episode 5 and Series 1, Episode 15 - are presented complete and remastered, alongside a cornucopia of previously unpublished segments from the series' original run.

In addition there's a host of rarities from the BBC Sound Archive and other sources, including the cast’s appearance on Sounds Familiar and Kenneth Horne’s autobiographical turn on The Time of My Life, both from 1968. These are followed by A Tribute to Kenneth Horne from 1969, Round and Round the Horne from 1977, and Horne of Plenty from 2004. There’s also a selection of rarely heard interviews with cast and writers, two sketches in celebration of Much Binding in the Marsh, and more.