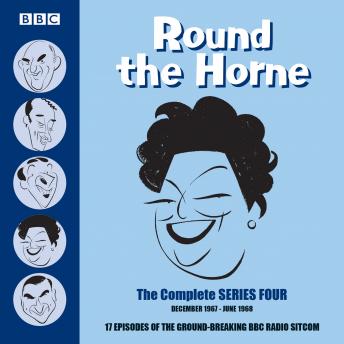 Round the Horne: The Complete Series Four: 17 episodes of the groundbreaking BBC radio comedy

Among the parade of regular characters were Julian and Sandy, the camp couple of resting thespians happy to turn their hands to anything, Rambling Syd Rumbo the musical cordwangler, Fiona and Charles the passionate duo, and J. Peasemold Gruntfuttock - the world's dirtiest man. Meanwhile regular film parodies, spoof sagas and musical interludes peppered the mix.

In addition to the 16 episodes of Series Four, this edition also includes the 1967 Christmas special episode Cinderfella and The Bona History of Julian and Sandy, in which Maureen Lipman takes a vada at Round the Horne's most flamboyant omipalonies.

Round the Horne: The Complete Series Four: 17 episodes of the groundbreaking BBC radio comedy