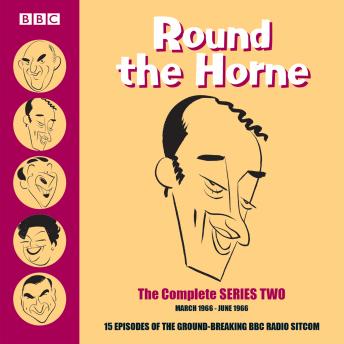 Round the Horne: The Complete Series Two: 15 episodes of the groundbreaking BBC radio comedy

Among the parade of regular characters were ulian and Sandy, the camp couple of resting thespians happy to turn their hands to anything; Rambling Syd Rumbo, the musical cordwangler; Fiona and Charles, the passionate duo; and J. Peasemold Gruntfuttock, the world's dirtiest man. Meanwhile regular film parodies, spoof sagas and musical interludes peppered the mix.

Round the Horne earned its place in the annals of comedy history, and is fondly remembered today as a groundbreaking series that influenced many more to come. Here the entire second series can be enjoyed once again, plus the 1966 Christmas episode, 'The Hunchback of Notre Dame' and a special Transcription Services episode 'The Man With The Golden Thunderball'.